Part 1: Professional league football is coming to the Dominican Republic in March 2015. Here’s a profile of how it’ll work and key information on some of the teams and players involved… 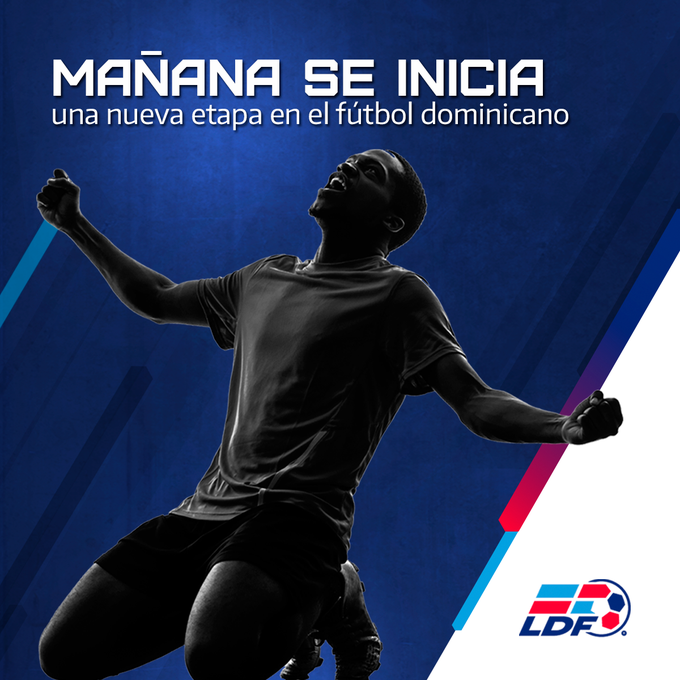 A promotional banner for the Liga Dominicana de Fútbol, with the smaller text translating to “a new era begins”. (pic credit: @LDFcomdo)

It was way back in September 2014 that the Federación Dominicana de Fútbol announced its intention to build a brand new professional football league in the Dominican Republic. Skip forward five months and we are on the cusp of actually seeing it happen, as the Liga Dominicana de Fútbol (LDF) is scheduled to start on 8 March. CONCACAF President Jeffrey Webb believes the creation is “an historic feat for this Caribbean island.” The LDF has replaced the Liga Mayor which has been the number one league since 2002, before that it was the Primera División. The league will consist of 10 clubs dotted around the country, battling it out for the chance to lift the trophy in August later this year when the 18-fixture regular season and knockout phase ends. Matches will be broadcast on national television for the first time, increasing exposure and coverage. Builders have been busy working on stadium infrastructure and making sure each club’s ground is fully functional before the big kick-off, which has been a challenge in a nation full of baseball stadiums. The recruitment departments at each club have also been proactive as nearly every team has needed strengthening, with a wide range of players joining the LDF.

Here in Part 1, The Home of Caribbean Football runs the rule over five of the 10 participating clubs and what sort of things to expect from them in this inaugural season…

Earlier this week Atlantico FC revealed themselves to the national press through a press conference at a restaurant called “Bride of the Atlantic”, showing off their new badge, kit, players and facilities. It was conducted by Club President Rubén García, with Market Manager Carlos Estrella and Secretary General Arturo Heinsen also present. Pretty much everything is new here as Atlantico are one of three clubs created specifically for the LDF. The region of Puerto Plata did have football before, but on non-professional terms, as Puerto Plata FC was a member of the Liga Mayor last year, although they were one of the weakest participants. The target now is to make a positive impact on the LDF and win over the local people, as well the general public in the Dominican Republic. Atlantico’s Venezuelan boss Jean Carlos Güell has been active in the market and used his contacts to bring in countrymen Jose Tafarel Ferreira and Jorge Luis Marquez. Jonathan Carabali of Colombia has also signed up to add some South American flavour to the team. The rule is only three foreign players per club in order to assure wide participation from homegrown players.

The football club of San Cristóbal, located near the coast of the Caribbean Sea, Atletico are managed by Gerard Dipré. Like many other teams, they have been warming up for the LDF by playing friendly matches. The latest of which was a 1-3 loss to Bauger FC on 27/2, coinciding with the country’s Independence Day, as the game allowed the squad to further gel and work together. The roster is predominantly made up of Dominicans, with José Daniel Velez of Colombia and Asutshi Yamanaka of Japan down as the foreign reinforcements. The club had initially tested five foreign players in a friendly versus Cibao FC in late February, encompassing Velez and Yamanaka as well as Guiliano De Febbo (Italy), Austin Artiga (El Salvador) and Melvin Barragán (Mexico). But it was the former pair that impressed the most. 24-year-old Hansley Martínez, born and raised in San Cristóbal, is a handy central defender with over 20 caps for the Dominican Republic. At 6 ft 6 in he is an effective weapon to have in the air.

San Cristóbal lock horns with Romana FC in the league’s opening set of fixtures and Dipré insists his players will do their utmost to make the tie as entertaining as possible: “We will try to make a great game, be tremendously competitive and be bold with the ball to hurt the rival. I will enjoy the game.” Asked on how he sees the season panning out, Dipré noted: “We will be attentive to the parties, all are important. There is no doubt that as the competition progresses the difficulty should increase, because every opponent [will] play a lot.” The club received some good news recently regarding tickets. San Cristóbal President Juan Guerra worked his magic and cemented a formal agreement with Uepa Ticket, as they’ll be the exclusive distributor of tickets for matches played at the Estadio Panamericano. This agreement is valid for two years and is the first of its kind signed by the company, based in the capital Santo Domingo, who have already got to work on selling tickets for Sunday’s clash.  San Cristóbal are hoping this partnership will attract more visitors to see the team throughout the season.

Similarly to Atlantico, Atletico Vega Real is a new club but the region of La Vega had non-professional football played there before. Hailing from the Dominican Republic’s third largest city, La Vega FC and Don Bosco Jarabacoa FC competed in last season’s Liga Mayor as a representation of the La Vega province. But they’ve had an overhaul in time for the start of the LDF. They boast one of the largest historic fan-bases due to La Vega’s centrality. Led by Jose Rodriguez, one of four Dominican managers coaching in the LDF, he believes that the Vegans don’t possess as much economic power as other teams, but that the group of players at his disposal will “sweat the shirt in court”. Rodriguez points out: “The style of game that we have developed has given us good results. We will go after the ball as if this was the last one, that is the nature of my players. Not only are we going to take part in the tournament [LDF], we are going after an important position.” La Vega has strengthened the squad by bringing in Colombian pair Richard Ibarguen and Carlos Ibarguen, as the club look to do their region proud over the course of the next five months.

A club set up from scratch to compete in the LDF, Cibao FC’s prospects of being successful in this inaugural campaign are very high indeed. Owned by a wealthy engineer and private university and coached by a Spaniard in the shape of Oliver Mendoza, Cibao are already one of the most rich and powerful clubs in the league, reinforced by the fact they’ve formed a partnership with Spanish giants Real Madrid who are going to be opening up a youth academy at the Estadio PUCMM. Two weeks ago artificial grass was put on the pitch to replace the old, muddy, uneven surface. The Santiago-based side have been splashing the cash to put some meat on the bones of the squad, bringing in four senior Dominican internationals: goalkeeper Wellington Agramonte, striker Domingo Peralta and defensive duo Edward Acevedo and Heinz Barmlettler. The latter especially is an excellent acquisition as Barmlettler has experience playing in Switzerland, Azerbaijan and Spain, where he was last with Real Valladolid. 23-year-old attacking midfielder Rafael Flores, who has 20 caps for the national team, is already stationed at the club.

That is a very impressive foundation on which to build on as Mendoza has used his Spanish connections to bring in compatriots Aitor Ramírez and Manuel Moreno, the former coming over from the Conference North England. Haitian right winger Charles Hérold Jr, 24, has also been signed to provide pace and trickery on the flanks. Cibao have been in preparation mode by drawing 0-0 to Moca FC in a warm-up friendly on 8 February, before more recently replicating that scoreline against Atletico San Cristóbal on the 22nd. Sandwiched in between Cibao engaged Villa Tapia, a Liga Mayor team in 2014, and ran out 3-2 winners with newcomer Peralta grabbing the opener. Another impressive feather in their cap is that Cibao have signed a sponsorship deal with Adidas, with the global brand seen on both the home and away strips. The facilities and player quality are there to make a mark on the LDF, but there are understandable question marks because this is a newly formed project, destined for either greatness or disaster.

As the country’s defending champions, Moca FC will be counted as red-hot favourites to take the LDF title. They’ve got a brand new home in the Estadio Bragaña García, a baseball stadium which will be modified for football purposes unveiled a week or so ago, and historically one of the largest supporter groups in the Domincan Republic. What’s more, 21-year-old central midfielder Jean Carlos López Moscoso – recently awarded Footballer of the Year in his homeland and perceived by many to be Dominican football’s great hope for the future – is contracted to the club. López featured in the MLS-Caribbean Combine held in Bayamon, Puerto Rico in early January and impressed so much that he was invited to the 2015 MLS SuperDraft, the only Caribbean representative at the Philadelphia event. He wasn’t signed up by an American team this time around, though, and subsequently returned home to Moca, who will really need all of López’s energy, agility and vision. There’s some promising youngsters coming up through the ranks, as well, such as Ernesto Trinidad. Moca contested Cibao FC and drew in the game already mentioned above in the article, but irrespective of the result this was important to try and accustom to the type of opposition they’ll be facing on a weekly basis. Losing just once last season in the Liga Mayor, Moca will be an equally tough nut to crack in 2015.

Thank you for reading! Feel free to leave any constructive feedback in the comments box below. A special thank you to Carlos Peralta, Aldo Mercedes, DOMIFUTBOL and Balompie Dominicano for their insightful comments and assistance with key information. Stay tuned for Part 2 coming out soon. Meanwhile, you can get in touch with me on Twitter, Facebook and Instagram.