I explore the state of football in Bonaire, one of the smallest islands in the region, by speaking to those closely connected to the game there…

One of the smallest islands in the Caribbean in terms of population and size, Bonaire is a Dutch special municipality within the Kingdom of the Netherlands located in the southern part of the region, 50 miles off the coast of Venezuela. The island is home to around 25,000 people and especially popular with scuba divers and snorkelers thanks to its protected marine resources and pristine waters. As well as scuba diving and snorkelling, football is similarly popular with the people of Bonaire, with the first confirmed football matches on the island reported to have taken place in 1923.

The Bonaire Football Federation was founded in 1960 but over five decades passed before they received full membership into the CFU (2013) and CONCACAF (2014, after initially being listed as an associate member for one year). Up until 2010, Bonaire competed as the Netherlands Antilles before its dissolution and had their own separate selection, too, that played regular unofficial friendlies against neighbours Aruba and Curacao between 1960 and 1988. When the Netherlands Antilles dissolved, Curacao took its place. Bonaire’s first proper match therefore came against Suriname in November 2013. They remain a non-FIFA member, though, along with five other islands across the Caribbean: Sint Maarten, Saint Martin, Guadeloupe, French Guiana and Martinique. National team player Lacey Pauletta has previously spoken out about their non-FIFA status and feels that in order for football to truly move forward in Bonaire, they need to join world football’s governing body which would give them access to World Cup qualification, however unlikely that may be. Seeing as Bonaire is not an independent territory, they would need support from the Netherlands to facilitate such a transition.

Integration into both the CFU and CONCACAF has allowed Bonaire to participate in the Caribbean Cup as they made their debut in 2014 qualifying. They began in the preliminary round and secured a win over the US Virgin Islands and drew to Montserrat which proved enough for them to top the group and advance to the next stage. There they were put in a more challenging group but managed to record a memorable 3-2 victory over Suriname, sandwiched in between two heavy defeats to Martinique and Barbados. “In the last Caribbean Cup, we demonstrated what we can do,” says Bonaire international midfielder Pedro Rodriguez Vergara, who captains SV Uruguay in the island’s top-flight. “We didn’t qualify for the next round but we played very good.”

Bonaire are involved in the ABCS (Aruba, Bonaire, Curacao, Suriname) tournament, featuring exclusively Dutch-speaking Caribbean islands. They have played in every edition since its inception in 2010 and unexpectedly clinched the title in 2011, ousting Aruba 4-3 on penalties. Two years later they beat the Arubans again, launching a terrific second half comeback to win in normal time and finish third overall. Bonaire were absent from this year’s Caribbean Cup qualifying and they aren’t allowed to compete in World Cup qualifying due to not being FIFA affiliated, meaning their last competitive match was a 4-1 loss to Curacao in February 2015. “Financially it was not possible to participate in the Caribbean Cup,” says Gina Chirino, in charge of PR at the Bonaire Football Federation.

The women’s national team made their debut in the 2015 Dutch Caribbean Women’s Soccer Cup, the first of its kind involving Oemasoso Football Club (Suriname), CVV Willemstad (Curacao) and Oualichi (Sint Maarten). They won one game against Oualichi, 3-0, but lost the other two, 1-11 and 0-4. It will be interesting to see if Bonaire enter the Women’s Caribbean Cup, rumoured to begin next year in preparation for the World Cup in 2019.

In terms of younger age groups, the Under-13s recently returned home from Aruba, where they competed in the Torneo Internacional Himno y Bandera tournament. They lost three games – 3-0 to Curacao, 1-0 to Venezuela and 1-0 to eventual champions Aruba – and beat Sint Maarten, 2-1. The Under-15s took part in the CFU Boys’ Championship for that age level two years ago, giving a decent account of themselves with a creditable 0-0 draw to St Kitts & Nevis in their opener before suffering defeats to Grenada, 1-0, and the Dominican Republic, 2-0. The next CONCACAF Boys’ U-15 Championship is scheduled for this August and there is no obvious reason why Bonaire won’t be appearing once more. There is a greater focus on developing the player in these age groups as opposed to prioritising the result.

The domestic league pits nine clubs against each other on a home-and-away basis with 16 games played altogether over the season. The 2016/17 campaign kicked off in November, stopped temporarily for a winter break, resumed in January and concludes in May, when the playoffs and final will take place. SV Atletiko Flamingo are the reigning champions yet are struggling this time around, sitting in mid-table with SV Vespo spearheading the table, boosted by their 2-1 win over SV Juventus Antriol on Friday. The league is amateur so players are not paid; football is a hobby that works around their full-time jobs.

Rodriguez Vergara believes there is no shortage of natural talent in Bonaire but limited opportunities hold young players back from pursuing a professional career in the game. “I see a lot of talent here in Bonaire, not only in football but different sports,” he explains. “Lack of opportunity is the biggest problem we have here, we don’t have many opportunities to grow into a football career. Lack of scouting and guidance are other problems because we don’t have someone that can guide the footballers to another level. Ayrton Cicilia, Yurick Seinpaal, Jurven Clara, Sigmaro Martina, Raydolf Felix and Rudger Thode are all young players and there are many more.”

“The main problem in Bonaire is that the mentality is to break down a prospect instead of helping them progress,” believes Chirino. “We have young talents who go to study either in the Netherlands, United States, Aruba or Curacao and not that many who concentrate on going further in their football careers. Only a few do.” Chirino also thinks that talented players looking to fashion a career in football need to focus solely on just that and not try to juggle different sports. “There are some prospects who are playing multiple sports that may hurt their football career in the future. They need to take precaution of injuries.”

There are very few Bonairean players playing with clubs based overseas. 21-year-old Justin Michel is an exception – he represents Southeastern University Fire in Florida, United States having joined from Rodriguez Vergara’s club, SV Uruguay in 2014. Michel balances college football with his education, studying for a degree in Sport Management at the University. The opportunity to go stateside stemmed from a combination of sending out a video highlight tape of him in action to as many schools as possible and being spotted by a US coach at a try-out in Curacao. The left-footed forward says “my ultimate goal is to play in either MLS or Europe, where I had a try-out for Eredivisie team FC Utrecht a few years ago.” Curacao international left-back Ayrton Statie was born in Bonaire’s capital, Kralendijk, and plays for FC Oss in the Dutch second tier.

Suehendley Barzey has been a key part of the squad ever since their integration into the CFU and CONCACAF. With three goals spanning across the ABCS tournament and Caribbean Cup qualifiers, Barzey is his country’s joint all-time leading scorer since Bonaire became official alongside Yurick Seinpaal, who attended the 2016 MLS Caribbean Combine but was ultimately unsuccessful at the event. Striker Ilfred Piar, midfielder Pauletta and defender Igmar Gijbertha are other important players for the national side.

Football is played at the 3,000 capacity Municipal Stadium in Kralendijk, the island’s main port. “We have two stadiums with artificial grass, but one of them is already damaged although we still play on it,” says Rodriguez Verdara. “It would be great if they fixed it so we could play on it better. The balls are of poor quality. We use the Mikasa brand balls. They are hard balls. On my team we use Derbystar balls. It would be nice if we used these balls in the championship. Or Nike or Adidas balls. We do not have many facilities, we have to share the fields with other clubs and they are not in good condition.” Artificial grass was installed with the help of FIFA and the Dutch FA (KNVB). The KNVB provide assistance to young players during the summer vacation and this is done by a Bonaire-born coach in the Netherlands, according to Chirino.

Looking towards the future, what kind of steps can be taken for Bonairean football to reach the next level? “I think that more investment is needed in facilities for athletes, better training, better balls, better referees, more seriousness and more opportunities,” believes Rodriguez Verdara. “And that we can play more than just the league, after the league there is nothing else for us. That’s it. Maybe they can make for example the winning team travel to play a tournament or games against other teams, something like that.” 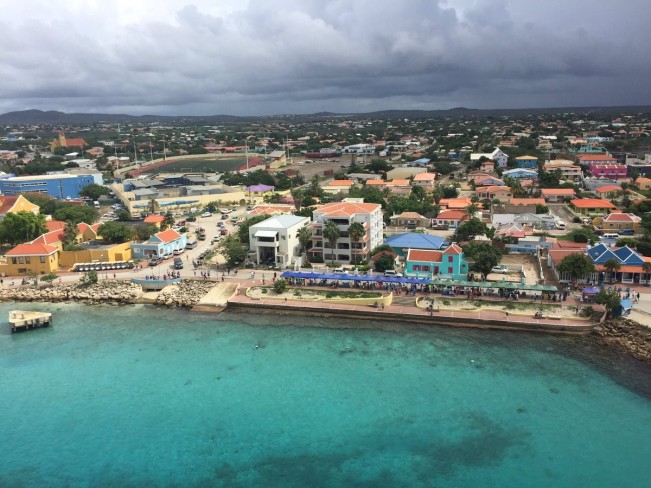 The Municipal Stadium seen towards the far left in the background. (pic credit: @bradham_andrew)

As far as Chirino and colleagues at the Bonaire Football Federation are concerned, their immediate focus is on getting more organised as a whole and ensuring Bonaire are well-represented at the competitions they’re eligible to play in. “Our goals are to reorganize the board to have a better structure, concentrate on the training and guidance of our future players and make sure our selections, both female and male, participate in all CONCACAF and CFU competitions. The Bonaire Football Federation will not give up easily. I say dream big and conquer the world.”

Thank you for reading! Feel free to leave any constructive feedback in the comments box below. Big up to Pedro, Gina and Justin for their time and insight. Meanwhile, you can get in touch with me on Twitter, Facebook and Instagram.