Check out my thoughts on Trinidad & Tobago’s latest Hex World Cup qualifiers as they fell to the United States and Costa Rica, making their chances of qualifying for Russia 2018 even slimmer… 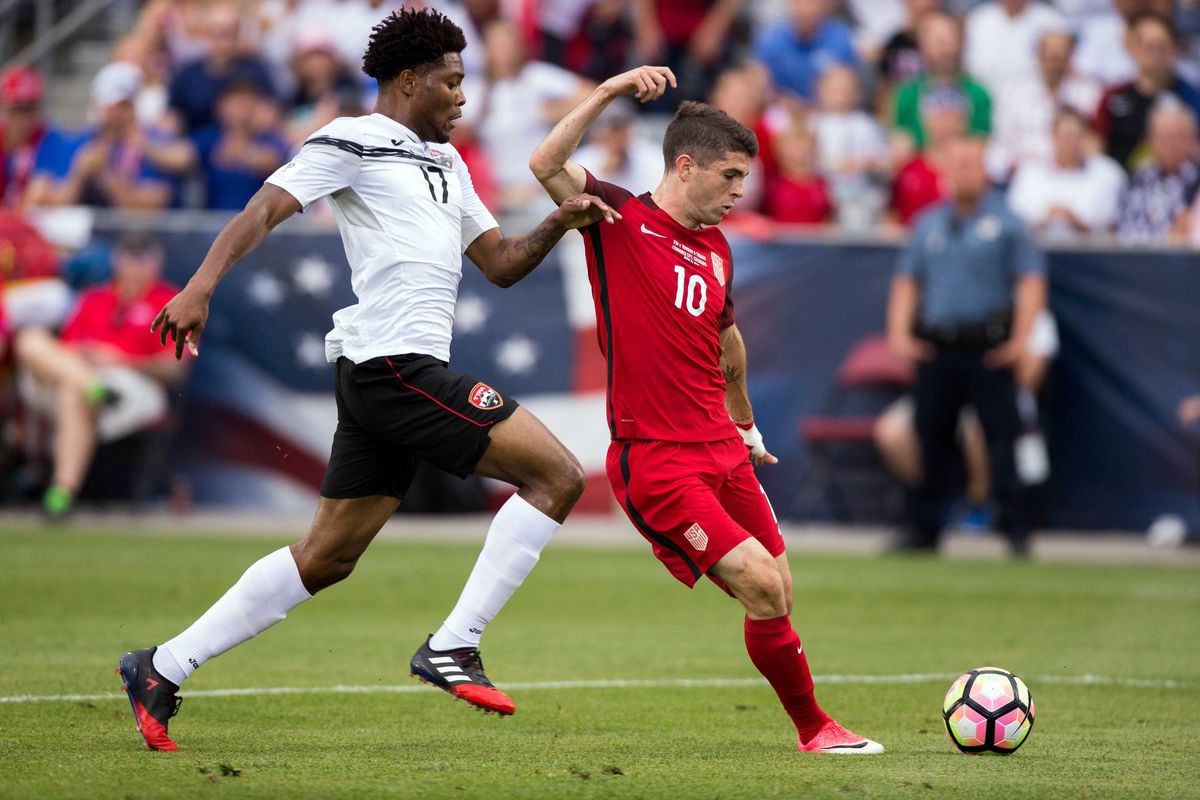 Although qualification to next year’s World Cup is not mathematically impossible, these two latest defeats for T&T against the US and Costa Rica are a real blow to the country’s chances. Their position at the bottom of the table has not changed with six matches played – five losses, one win and three points. It is true that T&T were underdogs for these two games and they were not expected to necessarily pick up any points away to opponents who, historically, have had the better of them.

Head coach Dennis Lawrence made a few changes to the starting eleven that lost to Mexico three months previously. In came Carlos Edwards, Sheldon Bateau and Nathan Lewis for Aubrey David, Curtis Gonzales and Cordell Cato respectively. T&T tried out a new formation, 5-4-1, with Bateau, Daneil Cyrus and Mekeil Williams as the back three, Edwards and Joevin Jones as wing-backs, Kevan George, Khaleem Hyland, Kevin Molino and Lewis in midfield and Kenwyne Jones up front. The game plan was clear: to sit deep and make themselves difficult to break down out of possession and then exploit opportunities to counter attack in possession. In his post-match interview, Lawrence highlighted the fact that the US employed a 4-1-2-1-2 formation – otherwise known as the ‘diamond’ – so playing with wing-backs pushed up high gave Edwards and Joevin Jones the ability to run into spaces out wide. They did this on several occasions and their crosses were of decent quality, just nobody in the right place at the right time to connect.

Goalkeeper Jan-Michael Williams was relied upon to make some important saves at important moments in the first half as he thwarted John Brooks, Jorge Villafana and Jozy Altidore twice. The visitors created their own openings, too, the biggest coming in the 32nd minute when Kenwyne Jones saw his header crash off the crossbar. It was a delightful cross in by Hyland and Jones had got to the ball before Tim Howard, but the post came to the rescue for the US. Just before the half-time whistle, Molino spurned a great chance by heading over inside the penalty area. The playmaker needed a bit more composure in that situation and he knew how big a chance it was.

The US were always going to come out hard at the beginning of the second period and that’s just what happened. The teenage prodigy Christian Pulisic, who I must say looks like a great player in the making, scored two goals in the space of 10 minutes which took the match away from T&T. For the first, Hyland initially gave the ball away sloppily in midfield and the US worked it well up the pitch, helped by Darlington Nagbe’s electric pace. For the second, Kenwyne Jones found himself in a good position in the final third, misplaced his cross and the US counter attacked at speed with George isolated in the middle of the park and simply unable to keep up with Pulisic. Lewis did score in between the two goals but it was disallowed for offside. The San Juan Jabloteh winger was making his first appearance in 2018 World Cup qualifying after impressing Lawrence in the Caribbean Club Championship last month.

The high altitude levels played a factor, as expected, as the T&T players tired in the second half. Shahdon Winchester, Leston Paul and Jamille Boatswain came on to provide some fresh legs but it was not enough. Overall, I feel as if the Soca Warriors deserved at least a point. They made two mistakes in the build up to Pulisic’s goals and were duly punished. That is the brutal nature of international football – usually whoever makes the least amount of mistakes wins the game.

Similarly, away to Costa Rica, they were very much competitive in the game and should feel hard done by not to have collected any points against one of the top teams within CONCACAF. Again, Lawrence stuck with a 5-4-1 but reshuffled the pack in terms of personnel. In came David, Curtis Gonzales, Hashim Arcia and Boatswain for Edwards, George, Hyland and Kenwyne Jones. This time Lewis and Mekeil Williams operated as wing-backs with Bateau, Cyrus and David in the back three, Gonzales, Arcia, Molino and Joevin Jones in midfield and Boatswain up front. The Ticos also employed three central defenders and two wing-backs meaning both teams used similar formations.

Indeed, T&T suffered a nightmare start. They conceded from a corner less than one minute in to send the home crowd into a frenzy. You have to be on your game right from the first whistle especially in hostile environments like this. Lawrence would have been telling his players: don’t give the opposition crowd anything to cheer about early on. Stay tight, stay disciplined. Match their intensity. And then that happens. It was a nice ball in from Joel Campbell, but perhaps Jan-Michael Williams should have taken more initiative and tried to punch away.

So the Soca Warriors were put on the back foot almost immediately. But to their credit, their response was good. Keylor Navas, fresh from winning the Champions League trophy with Real Madrid, produced a string of excellent saves to deny Joevin Jones from a free-kick and Boatswain from inside the penalty area. The equalizer finally came leading up to the break through a swift and efficient counter attack by T&T, instigated by Joevin Jones and finished off by Molino, who struck past Navas with his weaker left foot from outside the box. No question, they deserved that.

The really disappointing thing was that Lawrence’s men failed to protect that goal heading into half-time. They were keeping the ball in defence and midfield with seemingly little danger to worry about. But a through ball played in behind the defence stretched them and Costa Rica’s captain, Bryan Ruiz, showed his quality by creating something out of nothing. He left Arcia with twisted blood before stroking the ball into the far corner using the outside of his boot. It was either individual brilliance from Ruiz or very poor defending from Arcia and his teammates – or both – depending on which way you slice it.

There is no doubt in my mind that T&T absolutely should have been awarded a penalty in the 51st minute. Cyrus picked out Boatswain, who, running through towards goal, was having his shirt tugged rather blatantly by substitute Michael Umana. Umana made no attempt to get the ball – instead, he pulled on Boatswain’s shirt and was very fortunate indeed to escape with nothing. Of course, you cannot attribute the whole defeat to the referee but certainly that decision was a very significant moment in the game. T&T were unlucky with a refereeing decision in their 0-1 defeat at home to Mexico in March, also, when Joevin Jones had his goal disallowed for offside, although the replays showed he was onside.

When all is said and done, though, results are what matter the most and T&T have disappointingly come away with zero points, despite putting in two decent performances on the road. They have four fixtures left to try to engineer a way into the World Cup next year. Honduras at home and Panama away in September. Then Mexico away and the US at home in October when the Hex wraps up. Those September matches are going to be really, really crucial because Honduras and Panama are closest to T&T in the standings. I still believe they need to generate 10 points from the next 12 available. That would put them on 13 altogether which historically would be enough to qualify for the intercontinental playoff. 10/12 points is a very tall order admittedly.

This is mission improbable. Not mission impossible. T&T must keep fighting until the very end.