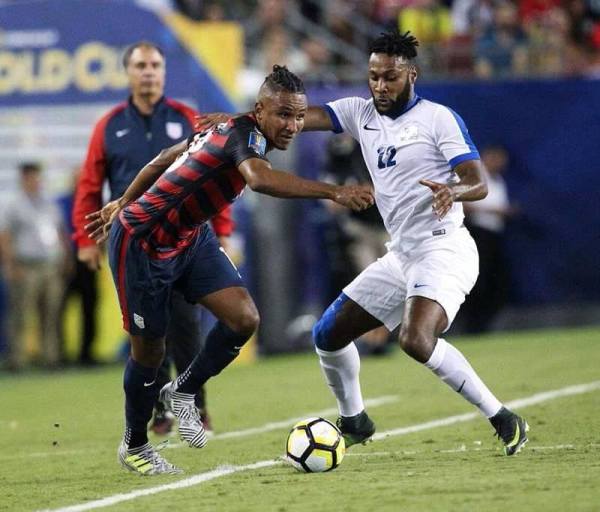 REPORTING FROM RAYMOND JAMES STADIUM, TAMPA – Martinique produced a spirited and plucky performance against the United States on Wednesday evening, losing 3-2 in an entertaining match at Raymond James Stadium.

The Caribbean side had been trailing 2-0, but displayed real character to strike twice in the space of just under ten minutes through Kevin Parsemain to draw level. Having done so well to get back into the game, the US then went up the other end and scored almost immediately much to the disappointment of the non-FIFA side.

Head coach Jean-Marc Civault mentioned in his pre-match press conference that he wanted his players to leave everything out on the pitch to give the US a tough time, and that’s exactly what they did. He made one change to the starting lineup that beat Nicaragua: in came defender Nicolas Zaire for midfielder Jean-Manuel Nedra.

To start, they set up in a 5-3-2 formation with Zaire, Jordy Delem and captain Sebastien Creitnoir making up the back three and Karl Vitulin and Antoine Jean-Baptiste as the wing-backs. Daniel Herelle, Stephane Abaul and Johan Audel in midfield with Yoann Arquin and Parsemain up top. Civault soon switched things up, though, reverting to a flat back four and pushing Vitulin forward to right midfield. Martinique were struggling at the back as Gyasi Zardes was causing problems with his pace and dangerous crossing, and he continued to be a menace throughout.

The first half involved chances for both teams. Parsemain went closest for Les Matinino, unluckily hitting the post before Abaul could only steer his glancing header just wide of the post off a corner. The floodgates truly opened in the second half. Omar Gonzalez got on the scoresheet first for the US, converting a rebound after goalkeeper Kevin Olimpa spilled Paul Arriola’s shot from distance. Jordan Morris then added a second, making a near post run to score a tap-in from inside the six-yard box.

Martinique’s reply was magnificent. Parsemain instigated their route back, using his laces to pick out the bottom corner past Brad Guzan who looked to be caught off guard. It was lovely hold up play by Abaul initially to set up his teammate. This gave Martinique belief and less than 10 minutes later, they tied level. Substitute Steeven Langil raced forward and delivered an inviting ball into Parsemain, who showed impressive balance to cut inside and shoot; the ball fell to Audel whose effort deflected off Parsemain and looped over Guzan. The Martiniquais radio commentators to my right in the press box jumped for joy. What a moment.

Frustratingly, more or less as soon as Martinique had finished celebrating, the US reacted instantly by Morris finding the roof of the net. Martinique were back to square one. Now they would need to score again. Towards the end they threw four to five players forward in an attempt to draw level once more. But it wasn’t to be.

Despite the negative result, Martinique should feel very proud of the hard work and spirit in their performance and that they gave the US – even with their experimental lineup – a real run for their money. In the earlier game at Raymond James Stadium, Panama beat Nicaragua 2-1 having originally gone a goal down from a terrific Carlos Chavarria strike. A ‘goal of the tournament’ contender, for sure. Martinique’s final fixture will be against Panama on Saturday.

Kevin Parsemain (Martinique): “We need to stay focused. The guys are disappointed about how the game went. I hope we can be better on Saturday [against Panama]. Panama are a tough team. Defensively we had a lot of difficulties, particularly at the beginning. We need to remember the good things we did. We were unlucky to be at 0-0 at half-time. We have to analyse everything deeper and play better on Saturday.”

Johan Audel (Martinique): “We are disappointed tonight because we came back to 2-2, but couldn’t keep the score like that. Their third goal killed us. They started to make a lot of passes at the end and we found it difficult to get the ball. We know we have to beat Panama because they have four points, as do the US. It’s going to be difficult and they are very strong. They drew to the US. But we have to win.”

Jordan Morris (US): “Martinique did a really good job in the first half. They kept it tight. They are a good team. I know Jordy who is a very good player and Kevin from Seattle Sounders. They made it tough for us so credit to them.”

Thank you for reading! Feel free to leave any constructive feedback in the comments box below. You can get in touch with me on Twitter, Facebook and Instagram.